David King‘s  Pop Up Theatre is back at the Etcetera on the 20th of February 2019, raising funds for Neurosciences, with Sweeties.  This is the 6th time a selection of monologues and shorts will be performed by a group of talented professional actors sharing and creating fantastic stories promoting new writing, often their own.  Shorts up to 10 mins, monologues  2-5 mins. Total run time approx 60 minutes.

David King is an actor living in London (UK). David is an AVM survivor after suffering a brain haemorrhage in October 2014 and the discovery of a congenital AVM. Acting has played a major part in his recovery and so has the gym! Before Acting, David worked in industry – his earlier career, with American Express in the United Kingdom, where he was one of the first people to design and produce training materials by internal email for their employees in Central and Eastern Europe. David then went on to grow meetings and events for international luxury hotel chains. David has combined his corporate training experience and knowledge with his actors training and experience to share his skills in workshops, blogging, coaching, and public speaking while he continues to build his acting career.

In 2018 David recieved 2 monimations for best actor in the short film in A Pinprick Of Light  which also won a multitude of awards globally for best drama.

Actor David King’s Pop-Up Theatre is back at the Etcetera Theatre Camden with bite sized pieces of drama.

David gives actors the opportunity to perform in a theatre and in return money is raised from ticket sales for The Neurosciences Research Foundation, a charity based at St Georges Hospital, that is close to David’s heart (or head) after suffering a brain hemorrhage in October 2014 and the discovery congenital AVM in his brain. 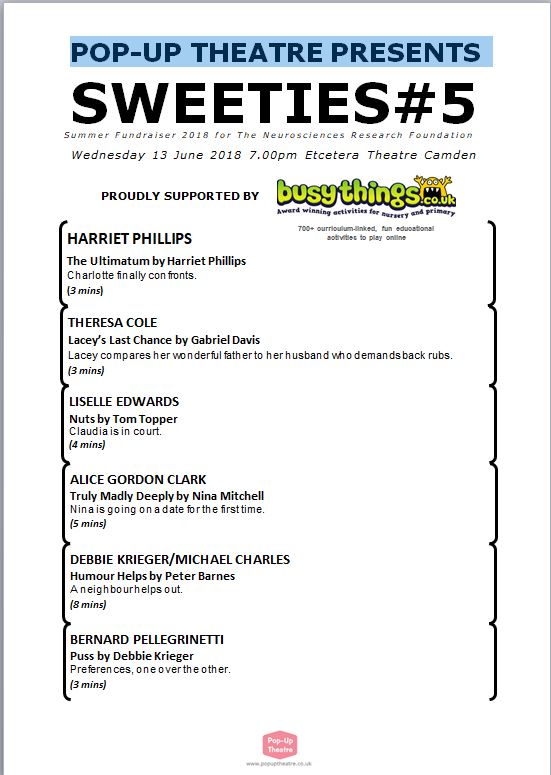 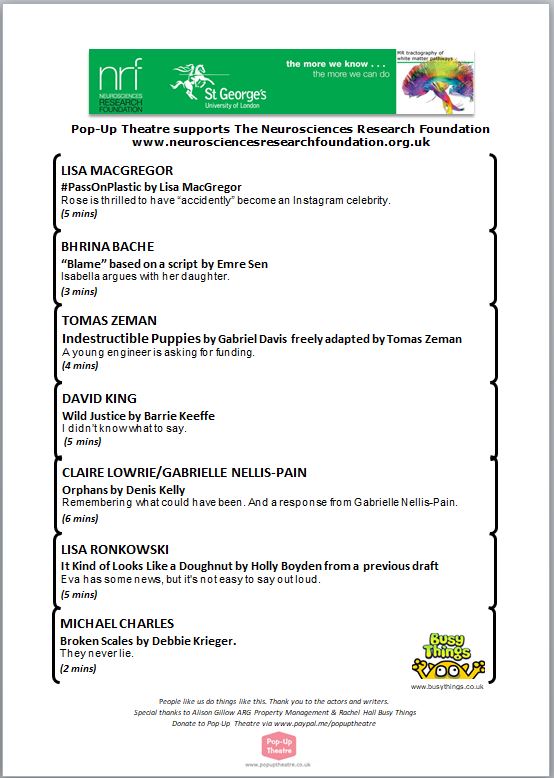 Actor David King’s Pop up Theatre is offering a unique auditions Workshop during this years Camden Fringe 2017 to pay for theatre rental.

David says ” Scripts will be banished from the workshop. Instead this 2 hour informal workshop is an opportunity to learn how to make the people in the room to sit up, take notice and take action.

No special requirements are needed for this workshop, just the desire to make a bigger impact in your auditions.

David also says “If want improve your all round confidence then this work shop is for you too.”

Workshop places are limited to 8 people.

Details of the next workshop coming soon.

Funds raised via this workshop will go towards the cost of theatre rental for Sweeties #3 in the evening – part of the Camden Fringe 2017.

Pop-Up Theatre is back at the Etcetera Theatre Camden with bite sized pieces of drama in Sweeties #2 – Monologues and scenes, classics and originals, brought to you by a group of talented actors creating and sharing fantastic stories for an appreciative audience and invited industry guests

David put together Pop-Up Theatre last year to help with his recovery from a brain haemorrhage and the discovery of a brain AVM – full story on Indegogo and at the Huffington Post.

David says with contributions and donations Pop-Up Theatre will be able to book and pay for approximately 15 hours theatre rental for performances, rehearsals and workshops and collaborate with other theatre companies empowering actors and community.

Planned so far for 2017 are Sweeties#2 March 17th 2017 announced, and Tennessee Williams 27 Wagons of Cotton in June dates TBC as well as a collaboration and support for Jude Alderson’s Amazonia Musical Theatre for The Camden Fringe August 2017.

Pop-Up Theatre supports The Neuroscience Research Foundation and raised £135 in 2016.

Building on from the success of Acting Exercise at this year’s Camden Fringe2 0126, Actor David King’s Pop Up Theatre Company is putting on an evening of Sweeties – a selection of monologues and shorts scenes.

David says ”…one thing that is missing from an actors training is the oppotunity to perform. I hope that the actors who are performing in Sweeties will be inspired to go out and create their own performances and opportunities.

In Steven Pressfield’s , new book on writing, Nobody Wants to Read Your Sh*t , Steven tells us that great scripts have an “All is Lost Moment” – the protagonist’s darkest hour​.​ These ​moments ​ are followed, by a way out.

For me, my “All is Lost Moment” happened in October 2014. I was admitted to hospital with a serious neurological condition – a brain haemorrhage, and the discovery of a congenital AVM (Arteriovenous Malformation).

After a several months in hospital I began my journey of recovery.

Acting really has been my way out.
​
Acting has helped me with the rebuilding of my executive functioning skills and given me a focus for life.​

One of the first things I did was to take Barbara Oaley’s MOOC (Massive Open Online Course) Learning How to learn which give me access to invaluable learning techniques and tools. Using the approaches I had learned I​ was able to pick up a script and began to read and learn lines again.

To get my performance confidence back I took RADA’s over 24’s Contemporary Scene Study course and progressed to their level 3 Acting course.

I also did workshops and an intensive advanced acting course with Jon Campbell where I worked on a script by Peter Barnes , Acting Exercise, which I am now taking to the Camden Fringe.
​
​I am now focusing on rebuilding my career as a film actor I am in pre ​production​ ​for Seagull with White Space Film Productions

Any profits from ticket sales will go to the Brain and Spinal Research Fund via Mr Francis Johnston. Consultant Neurosurgeon, at St Georges Hospital. Tooting. London.